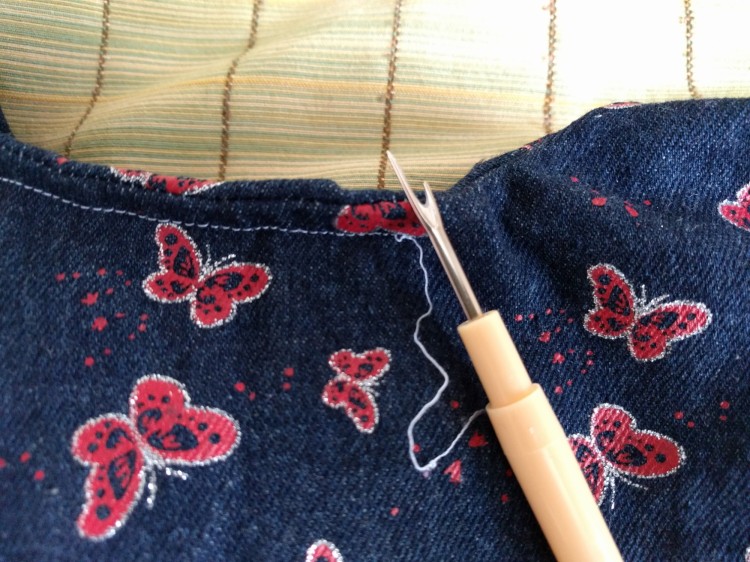 I knew pretty quickly that I had made a mistake, but I pressed on anyway, sewing two more seams and hoping that the finished product would be fine.  Instead, continuing on seemed to make the error worse.  And now I was faced with the depressing task of ripping out several hundred stitches, recutting a couple of pieces, and continuing on. Honestly, I put the garment on a hanger, hung it on my “work-in-progress” hook, and ignored it for a couple of weeks.

See, I had gotten cocky.  I made a dress for my daughter that came out cute and that she loved.  She wanted another dress and it occurred to me that I could make a jumper, a sleeveless dress designed to go over a long sleeve shirt and worn in colder weather, with the same pattern.  All I would have to do is step away from the suggested fabrics (all light and drapery) and move to something heavier and stiffer.  “That should be easy enough,” said I, the newbie sewist.

So off we went to JoAnn Fabrics, where my daughter picked an adorable denim with sparkly pink butterflies on it.  She was thrilled.  It was a fairly heavy denim, but I was still pretty sure that it would work.

And it did, right up until I started finishing the collar.  See, the pattern instructions call for you to use a fusible interfacing (a material of variable weight and stiffness that you fuse to your fabric with an iron) to give a bit more form.  In this case, it ensures that the neckline looks smooth and crisp, and on the dress I made before, using a light, cotton broadcloth, it worked perfectly.  But this isn’t light, cotton broadcloth.  This was moderately heavy denim.

So, when I went to sew the denim now made even stiffer by the interfacing to the dress, it was instantly a problem.  There was no give.  I wasn’t 100% sure what the problem was, but I knew there was a problem.  Rather than stop and figure it out, though, I pressed on, finishing the seam.

It was even more clear that there was a problem when I tried to turn the collar over and top stitch it flat.  Even with the liberal application of an iron, the damn thing wouldn’t lay flat.  And when I went ahead and top stitched (because I somehow thought stitches would make it better–did I mention I’m a noob?), It got orders of magnitude worse.  It puckered and rippled in a weird way.

It was clear that this was not a wearable garment as it was.  And I was pretty sure that I knew what the problem was–the interfacing.  There was nothing to do but rip out the two seams I’d seen.  That’s hundreds of stitches.  Not only is ripping out seams tedious, it means undoing work.  And that’s depressing.  So I put the garment away.

Yesterday, I picked it up again.  I actually wanted to get started on a dress for myself but, again like a noob, I had ordered the wrong size pattern.  The only thing to do was pick up this dress again.  And the only thing to do about that neckline was a complete redo.  And so I did.  I went through the tedious process of tearing out stitches one at a time.

So, is this all just a boring story about me screwing up at a hobby.  No.  There’s a writing connection.  More than once, I’ve realized that I was making a mistake as I worked on a piece of writing. I might be three thousand words into a section that isn’t working.  But deleting several days worth of work is depressing, and so, more than once, I’ve tried to keep going, pushing on to five, eight, ten, or twenty thousand words of the wrong direction before finally giving up.  It’s depressing and it makes it tempting to put the writing away, rather than make the necessary changes.  My suspicion is that more than one would-be writer has a half finished manuscript in a drawer that they’re ignoring because they know they need to, well, rip out a bunch of seams.

But ripping out the seams can feel good.  When I finally bite the bullet and highlight those pages that aren’t working and hit CTRL+X (or copy pasta into my purgatory file, because every writer should have one of those), it feels good.  And when you get going in the right direction, it feels great.  When I finally got those seems ripped and cut new pieces, I felt pretty good.  When I get around to sewing them together, I imagine it’ll feel great.

Ultimately, with any creative enterprise, there will be a fair amount of trashing and starting over.  It’s never not heartbreaking.  But it’s necessary to create anything worthwhile.  Shying away from it will only harm you.