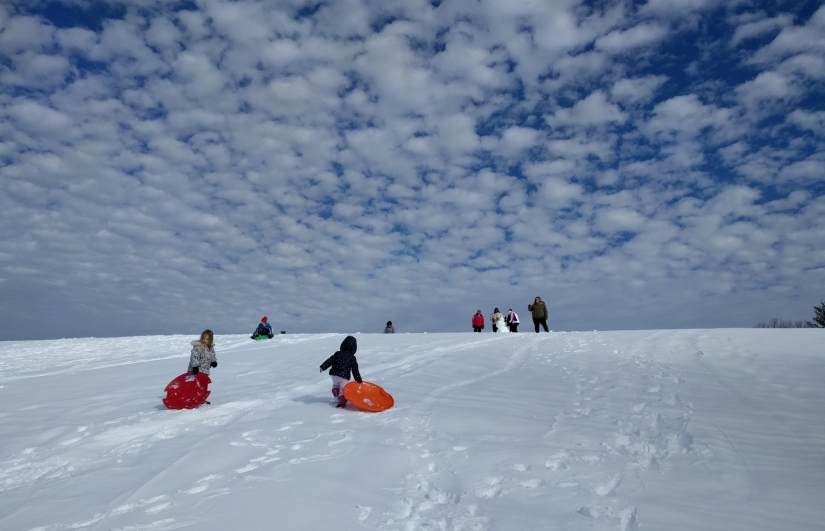 Exercise is really fraught.  We spend a lot of time performing “exercise”, movement that usually feels like a chore for the purpose of weight loss/maintenance .  It’s true that I know I will feel better after running on a treadmill, but while I’m doing it, it just feels like work.  Yoga is meditative, but it’s only intermittently fun.  Weight lifting can lead to an ego boost as you find yourself getting stronger and able to do more, but is picking stuff up and putting it down anybody’s idea of a good time?  In my brain, work outs get lumped into the same category as doing dishes and taking out the garbage and going to the post office.  The net result of all this “work” is that it makes being sedentary more attractive.  After all, watching TV is, usually, at least entertaining.

I wasn’t thinking about exercise, though, when I went with my brother and sister-in-law and my two kids and their two kids to a big publicly owned natural space just one town over.  We’ve gotten a couple feet of snow in the last two weeks, and the sunny forecast made it seem like a great day to go sledding.  And what’s more fun for a little kid than sledding?

I loved sledding as a kid.  I was fortunate enough to grow up with a decent sledding hill in my yard and a bunch of siblings to play with, and I have lots of fond memories of the hours and hours we spent outside going on ride after ride down the hill.  Sledding is like a roller coaster, one you can ride over and over without waiting in line and one that could toss you off into the snow on any given run.  Plus your parents never tell you it’s too expensive to do.

But as an adult, sledding has been thoroughly off my radar.  It hadn’t occurred to me until I was standing at the top of the hill holding a sled, watching my nearly five year old daughter hurtling down, that I thought, Hey, I should go down, too.

Even as a thirty-five year old woman, sledding is a rush.  It’s thrilling and kind of scary.  You’re whooshing along with little to no control for where you end up.  You get tossed off and land in a heap, completely undignified.  You get snow in your boots, your jacket, your mouth.  Your hood or hat fly off.  Your butt gets soaked.  But as you sail down the hill, bumping over the snow, it’s impossible not to laugh and shriek.

And then you walk up the hill, through deep snow, carrying your sled.  It’s hard work, but the anticipation of another whoosh down the hill is enough to make you want to run.  And walking back up the hill after sledding down is a communal event. You laugh with the others making the hike up, talking about how this one fell face first in the snow and that one went so far and the other one has never gone that fast in his life.  Before you know it, huffing a bit, you’re at the top, ready to go again.

And the view helps. 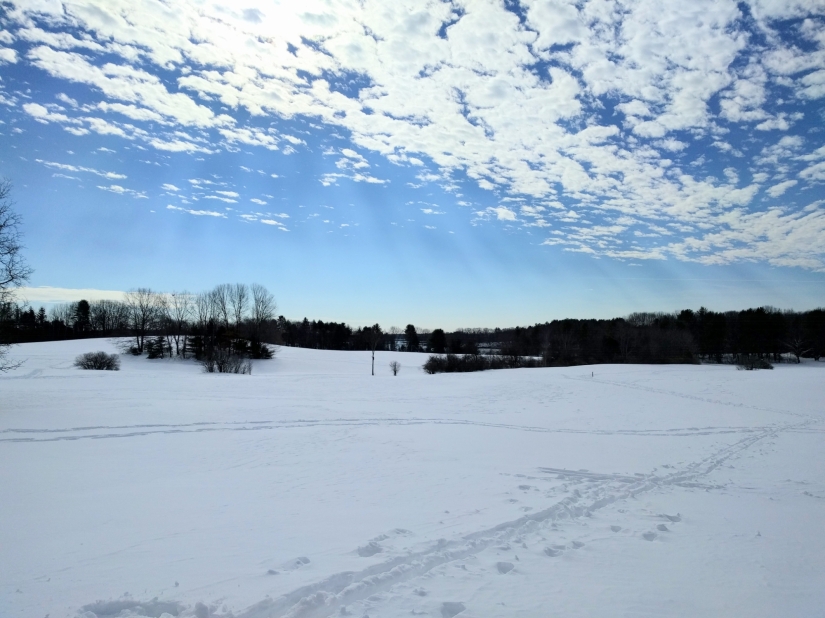 After almost an hour and a half of sledding, I was suddenly starving.  It was lunch time but I’m not usually that hungry by noon.  And then it occurred to me that between my own trips down the hill and the times I went down to help one of my kids or my niece or nephew I’d probably climbed that big hill a dozen times or more, all through two feet of snow.  No wonder I was starving.  That’s a fair amount of exercise.

But none of it felt like exercise.  It never felt like the kind of thing I was doing to lose weight or gain muscle.  It was just a fun thing I did to pass the time that had the added bonus of getting me moving.

There’s a tendency to mock younger adults (the dreaded Millennials) who like to participate in child-like exercise: Frisbee golf, dodge ball leagues, etc.  It’s often exhibit C or D in the Case for How Young People These Days Are Suffering from Arrested Development.  But activities things are fun in a way that running on a treadmill never could be.  Why shouldn’t we seek out exercise that doesn’t feel like a chore?  Why is the mark of adulthood to eschew these fun activities in favor of the things that feel like work?

The warmer weather we’re going to have over the next few days will probably melt most of the snow, making sledding impossible, at least until we have another couple of blizzards.  But the lesson I’m taking away from that day on the hill is the importance of seeking out movement that is fun for it’s own sake.  That, it seems, is the real secret to long lasting health and fitness–finding a way to enjoy the process, not just tolerate it.

Like what you read here?  Be sure to see more of it by signing up for my newsletter and liking me on Facebook.